Music on an ascending scale

This weekend (February 24, 2017) the Philadelphia Orchestra under Yannick Nézet-Séguin completed its Brahms cycle with a performance of his Fourth Symphony. Earlier this season, he conducted the First and Second Symphonies, while Herbert Blomstedt led the orchestra in the Third a week before this concert. But you didn’t think this was going to be ho-hum, more “Brahms as usual,” right?

Of course not. Nézet-Séguin had a few cards up his sleeve with some fascinating disclosures about the German masters.

Bach and Brahms may not be the most likely pairing for a concert program. Bach is Baroque, tethered to the church he loved, a family man from whom music poured almost effortlessly from a young age. In contrast, Brahms is Romantic, but more ponderous Victorian romanticism than Chopin or Wagner’s flight-of-fancy effusions. Brahms was a bachelor, tirelessly revised and rethought his output, and organized religion was not his cup of tea. And yet as Brahms’s life neared its end at the 19th century’s close, he drew on a lifelong regard for Bach in completing his own valedictory masterworks.

Between programs, Nézet-Séguin walked unexpectedly to the podium and revealed some links between the next work (Bach’s Cantata No. 150) and the last movement of Brahms’s Symphony No. 4 in E minor.

That last movement is a series of variations on eight chords that form part of the structure of the cantata’s own last movement. Peter Richard Conte, best known as “Wanamaker Grand Court Organist at Macy’s,” soloed on the Kimmel Center’s instrument, providing irrefutable examples from each work. Nézet-Séguin is absolutely brilliant in illuminating selections with these little side chats in some of his concerts, not only helping us understand the music, but also eliminating the stuffiness associated with classical fare.

So how was Brahms’s Fourth? Phenomenal. I haven’t heard too many performances by this orchestra more enthusiastically greeted. Perhaps this performance style was a bit free and loose, but being fast and loud brings excitement to any work. Beyond this deliberate infusion of energy, profound musical thought took place, alongside a balance of forces both subtle and sublime, and some glorious sectional and solo playing.

A wonderful first movement duet showcases the clarinet (Ricardo Morales, principal) and bassoon (Daniel Matsukawa, principal). The clarinet is sometimes the forgotten enchanter of the woodwind forest. Neither pleasantly rasping like a double reed, nor a haunting echo like the French horn (often grouped with the winds), the clarinet’s pure, liquid strains refresh, beguile, and revive. It possesses a warm woodsy quality not unlike the resonance of strings, but with the added dimension of living breath.


The concert opened with Brahms’s solemn Chorale Preludes (a form also beloved by Bach). This performance featured a new transcription by Detlev Glanert, commissioned by the orchestra. In his spontaneous chat, Nézet-Séguin rightly referred to these hymn-based works as solemn and majestic. C.S. Lewis once observed that holy places are dark places; these preludes, some played on the organ by Conte, others transcribed for orchestra, lack the rousing charm of an overture, instead evoking sinking grandeur of twilight.

The selection I most enjoyed was Bach’s cantata. Four talented young soloists joined a much scaled-down orchestra, which despite the number 150, was possibly Bach’s first cantata. For all that, it is harmonically imaginative, loaded with vivid musical descriptions of phrases and words, sung with bright intensity by Vanessa Vasquez, soprano; Chrystal E. Williams, mezzo-soprano; Jonas Hacker, tenor; and André Courville, bass-baritone. The artists also functioned as the chorus.

It was quite a balancing act to size down the orchestra just enough to capture the lightness of an 18th-century ensemble without drowning in Verizon Hall’s cavernous recesses. This cantata is known as “Nach dir, Herr, verlanget mich” (“I long after thee, Lord”). The performance was on fire with feeling under Nézet-Séguin. It wasn’t church singing, it was real drama, drawn from the text and music by a master conductor. This augurs well for Nézet-Séguin’s future at the Met, as well as further exciting fare in local venues.

This review appeared originally in The Broad Street Review the week of February 26, 2017.   broadstreetreview.com

Herbert Blomstedt is a small man, 89 years old, with a kind expression and gentle manner. But when he conducts Brahms, as he did last weekend with the Philadelphia Orchestra, he unleashes all the power and tenderness pent up in the score, that inert leafbud just waiting to explode. With graceful, birdlike motions, his white hands caress the air, sans baton, and you, the audience, feel he is a conjuror -- but of the highest, most respectable sort: a shaman, a priest. The whole world, expressed in sound, comes tumbling out of an orchestra staged differently than usual, with celli in the center and second violins to the right. It is less a concert than a revelation. 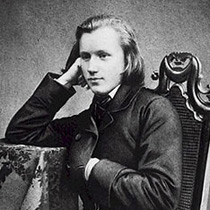 Sculpting sound
I have never been much of a Brahms fan, but perhaps I hadn’t found the right interpreter until now. This season the Philadelphia Orchestra is performing all four of Brahms’s symphonies, and Yannick Nézet-Séguin led the orchestra with delightful performances of numbers 1 and 2. Symphony No. 3 in F major is a captivating work in a class of its own. It begins with a shoutout in the brass, rises on the upward sweep of the notes F–A-flat–F, and blends sweetness and surprise in the second movement.
The third movement contains one of the most beloved melodies in the classical repertoire, known not just to music lovers but also to popular culture buffs (remember Ingrid Bergman and Anthony Perkins in Goodbye Again or Frank Sinatra singing “Take my Love?”). In each phrase and measure,

Blomstedt honors this music’s integrity, emphasizing tenderness over sentiment. He sculpts the sound forces at his command, here emphasizing a pizzicato in the bass, there releasing a silken clarinet. The oboe, played by Richard Woodhams, takes up the tune, its brightness slicing through the dark of the full orchestra. What a staggering effect, but not out of keeping with Blomstedt’s vision for this work – one that marries intelligence with feeling.

The symphony ends with a conversation between minor and major, optimism winning out, and a return to the opening movement’s shining F–A-flat–F. Throughout, Blomstedt never faltered, always fresh in his understanding and ability to elicit exactly the desired context or effect. The conductor, who celebrated his 30th anniversary leading the Philadelphia Orchestra, was born in the United States to Swedish parents and studied at Juilliard, in Stockholm, and in Uppsala. He is conductor laureate of the San Francisco Symphony and was music director of the NDR Symphony and Leipzig Gewandhaus, as well as chief conductor of the Staatskapelle Dresden and many other posts in his long, distinguished career.
What I will remember most about his interpretation of Brahms’s Third was its lack of pomposity, the ability to express grandeur with nuance, and a deep understanding and irresistibly sincere enthusiasm.

Fortunately for us, Blomstedt also led the first half of the concert in Mozart’s 25th Piano Concerto, in sunny C major, with soloist Garrick Ohlsson, one of the most celebrated American pianists of our time. While not the last of his works in this form, the C major concerto K. 503 is considered the last of the grand piano concertos by the Austrian master and is contemporary to the Prague Symphony K. 504.

The concerto is scored for full orchestra, minus clarinets. Leading orchestral forces far mightier than those available in Mozart’s time, Blomstedt achieved a sound that was grand but not not overpowering, and respected the work’s classical character.

A familiar presence on Philadelphia concert stages, Ohlsson, who is highly regarded for his Chopin interpretations and overall mastery of the piano repertoire, brought a sure touch, lively intelligence, and pleasing tone. The first movement alone is a universe of musical sensation. Mozart invites us to share in everything he knows about music, from commanding our attention to beguiling us with a shy piano entrance to celestial tone painting. Mozart was one of Beethoven’s favorite composers, and perhaps the four-note motif of his Fifth Symphony can be traced to an appreciation of the first movement of this concerto, which flickers incandescently with its syncopated beat.

Ohlsson played the wonderful Brendel cadenza in the first movement, reminding us of the musical treasures we have lost because composers did not always write down the cadenzas they improvised for their works.

The second movement is not one of Mozart’s more melodic episodes, but holds its own as a serene and thoughtful respite, respecting the expanded capabilities of the piano of his day. In high spirits, Ohlsson played the energetic final movement with clarity, pleasure, and a bit of whimsy. Blomstedt tied up the strands of sound around him like the bow on a gift generously given to us by the composer and these performers.
(This review appeared in the Broad Street Review the week of Feb. 20, 2017.  broadstreetreview.com)
Posted by Linda Holt (L.L.Holt) at 11:02 AM No comments:

Invictus, a new novel about music, race, and redemption, has been named a Finalist for the annual Landmark Prize for Fiction. Homebound Publications made the announcement on February 14, 2017. This year's prize went to Mark Seiler for the novel, River's Child. L.L. Holt was identified as the first of two Finalists for the award.

Several publishers are currently considering Invictus, the story of a Black child born to a devious white musician and his long-suffering wife in late 18th century Germany.  Based largely on fact and the result of years of research in Europe and the U.S., Invictus explores what it means to be different, the power of music and genius, and the indomitable human spirit. Publication is expected during the 2017-18 publishing cycle.
Posted by Linda Holt (L.L.Holt) at 6:17 AM No comments: