I began reading “George Sand A Biography” by Curtis Cate (1975, Houghton Mifflin, Boston) in August 2017 and completed it December 30, 2017. I read it at the rate of approximately seven pages a night. The book is 732 pages of narrative, plus supplementary material (my guestimate is 307,440 words of narrative). Born in Paris, Cate held three university degrees (Harvard, and from schools in Paris and Oxford), was an editor of the Atlantic Monthly, and wrote other biographies. He died in 2006.

I found this book engrossing and informative, notable primarily for the author’s high regard of the most prolific female novelist of the 19th century, his engaging writing style, and the historical context for Sand’s works, activities, and romances. Born Aurore Dupin, George Sand lived from 1804 to 1874, largely in her family estate, Nohant, in the French province of Berry. She was the author of  60 books, most of which are still in print, and 25 plays, all of which were staged in her lifetime, as well as essays, articles, and voluminous correspondence with some of the 19th century’s most celebrated cultural icons.

While Sand is famous for wearing men’s clothing, smoking cigars and cigarettes, having many affairs, and writing under a male name, Cate wisely focuses on her life as a creative person and her role in French history (literary and political) and downplays the so-called scandalous details of her daily life. It is worth noting that some of the greatest writers, artists, and musicians of Western Europe in the 19th century—Liszt, Flaubert, Turgenev, Hugo, Balzac, Pauline Garcia, Heine, Delacroix—admired the woman and her work, and many paid homage to her as one of the greatest writers of her time. Her affairs included those with the poet Musset and the composer Chopin, and she was a leading figure in the political uprisings in Paris during her lifetime.

Cate’s biography fails, however, in an inability to make Sand come alive for the reader. What is she wearing, how does she dress her luxuriant black hair? There is a vivid description of Sand in a colorful frock, wearing a jaunty Turkish cap, early in the book. Surely, this was not an anomaly. How does she move, and what is she like when she dances? What percentage of the time did she dress in men’s clothes? I suspect it wasn’t that often. On more than one occasion, Cate quotes visitors who dismiss her as looking like a cow! (Ruminant, pensive, silent.) Surely this cannot be the exciting female presence who had 20 lovers and was synonymous in the popular imagination with Romantic-era passion and free love.

Sand does emerge, however, as a study in contradictions, and it is this complexity which kept me reading slowly and carefully, night after night. Heralded as the mother of Women’s Liberation, she  questioned the need for women to vote, a seeming contradiction. “We can’t worry about voting until we can inherit our own property,” she protested, having lost so much at the death of her father. However, Cate does capture Sand’s devotion to hard work, writing through the night for decades to support herself, her family, servants, and home. And yet there are hints of tender moments, such as an idyllic stroll and steamboat ride with the bachelor Flaubert (not one of her lovers) and his mother along the Seine. If this does not conjure up images of Impressionist painting to come, then nothing shall.

“George Sand A Biography” is well worth reading: as a story, as history, as a tribute to a writer who is currently not as popular as her more celebrated peers. But just as small, independent publishers are discovering and publishing the works of pre-Austen novelists, so George Sand’s time will come again. Read this book and be prepared! (Review by L.L. Holt, author of The Black Spaniard.)

Podcast and Playlist for WPRB Podcast on The Black Spaniard

Here is the podcast and playlist for my appearance on a Classical Discoveries radio segment titled, "Beethoven with a Twist," aired in December 2017 on WPRB, Princeton University's independent, community supported radio station. Marvin Rosen, host of Classical Discoveries, celebrating more than 20 years of continuous quality programming, was the interviewer. The program focused on my new book, The Black Spaniard. A prequel, The Reluctant Prodigy, will appear in 2018. 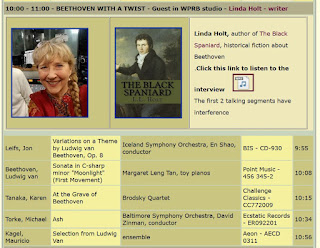 WPRB 103.3FM Princeton to focus on The Black Spaniard

I'll be on WPRB 103.3FM Wednesday, December 6 talking about my favorite topic: Beethoven!

Approximately between 10 a.m. and 11 a.m., Marvin Rosen, host of Classical Discoveries, will talk to me about my novel, "The Black Spaniard," which looks at Beethoven's life from age 21 to age 33. (Reviews of The Black Spaniard by L.L. Holt are on Amazon.com .)

"The Black Spaniard" not only follows actual events in the life of Beethoven, but also puts them in historical context, exploring the often ignored cultural diversity of Vienna, Austria, at the turn of the century (late 1700s to early 1800s). There is also a surprise twist on the possible identity of the Immortal Beloved (remember: it's fiction!).

WPRB is the Princeton University radio station. Marvin's own site, www.ClassicalDiscoveries.org , will carry the December 6 program for a period of time following the broadcast. Listen up!