Fireworks in the Dead of Winter


January 25, 2019--I wasn’t particularly looking forward to this weekend’s Philadelphia Orchestra concert, with its theme of Death. But the program’s two seldom-performed works belied the gloomy prospect with fiery performances and visceral passion.

Yannick Nézet-Séguin and the Orchestra began the program with Leonard Bernstein’s colossal Symphony No. 3, the “Kaddish,” so named for the Jewish prayer for the dead. Bernstein’s centennial may be past, but the renewed awareness of his musical genius lingers on (two biopics about Bernstein, Hollywood’s signal that someone matters, are in early stages of production).

As a composer, Bernstein was not only a master technician and stylist, but he also captured the unrest, consternation, and malaise of the second half of the 20th century in America as no other. It was fitting that his Third Symphony, hard on the heels of the Second subtitled “The Age of Anxiety,” should question the very existence of God and shout out humanity’s frustration when confronted by the pain and cruelty of existence.

The Kaddish employed about 100 musicians, as many choir members, a boy choir, soprano soloist (Nadine Sierra) and speaker (Charlotte Blake Alston). From her first powerful words, “I want to say Kaddish,” Alston had the audience in thrall, declaiming Bernstein’s own challenging text throughout a performance of non-stop brilliance by all participants. A celebrated storyteller, Alston can make the hairs on your neck stand on end simply by aspirating the final syllables of “magnified” and “sanctified.” 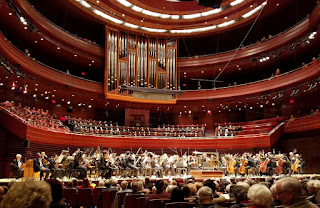 Philadelphia Orchestra before The Kaddish
Conducting without a baton, Nézet-Séguin seemed to mold and sculpt the musical content of three stirring movements. Bernstein manipulates 12-tone technique to musically describe through discord our experience of heartbreak and anger. He kneads atonal chord progressions into a kind of halo surrounding a return to tonality at the end of the work. It’s an approach that could be too obvious in the hands of a lesser master, but is convincing and moving under Bernstein’s touch.

Wearing a backless red sheath gown, Sierra rose like a flame in her solo passages, which included a lullaby to God delivered with tenderness, lyricism, and deep feeling. Even nearly 60 years after its composition, Bernstein’s own text is unsettling in its taunting cynicism, almost making fun of the Deity by suggesting that humanity can nurse a dying Godhead back to health. While this may seem odd to us today, it reflects the growing Angst, introspection, and egocentrism of the era (early 1960s) in which it was written.

And yet, words won’t change anything. But music can “The dawn is chilly,” states the Speaker near the conclusion of the final movement, “but has come. If I die, You come with me,” she says quietly as the soundscape rises from minor to major and the entire orchestra and choirs together soar into a finale of almost unbearable exultation. Humanity’s questioning and cajoling have served their purpose. In spite of everything, we are left with a notion of splendor and hope.

Gioachino Rossini is best known for his popular light operas (The Barber of Seville, Cinderella, et al.). He took early retirement in his 30s, and while his opera-writing days were over, he did turn his hand to the occasional musical composition, such as the final work on this concert, the Stabat Mater. Sometimes referred to as a hymn, a Stabat Mater is actually a form of its own, a Roman Catholic text set to music and performed as a religious or concert selection. Dating to the 13th century, the Stabat Mater text honors the Virgin Mary as she stands at the foot of the Cross. Although not as popular as some other religious narratives, the Stabat Mater has been set by a number of notable composers, including Pergolesi, Vivaldi, and Dvořák.

Rossini’s version, in 10 movements, calls for orchestra, four singers, and choir. Not surprisingly, the work begins with low, melancholy passages in the orchestra and choir, painting in sound a portrait of Mary the mother of Christ, Mary Magdalene, and the disciple John at the site of the Crucifixion. In his original version of 1833, Rossini had composed only movements 1 and 5 through 9, adding additional movements a number of years later after one of those complicated legal squabbles that riddle the history of classical music.

It may be the break in time that accounts for the peculiar difference in tone between the first movement and much of what follows. Not only are the second and third movements much lighter, but they have a jaunty lilt that seems to foreshadow some of Verdi’s biggest hits. In a way, encountering these tunes, which could easily have been married to racy lyrics, was as unsettling as hearing Bernstein’s Speaker hurl insults at God.

The hour-long work is a bit tedious for the first 45 minutes, although musicians and singers performed impeccably. Individually and together, the four soloists crafted a series of beautifully sung solos, duets, and a quartet from the meager material presented to them. But all that changed after the Inflammatus/Day of Judgment (Movement 8). Here, Nézet-Séguin shifted into a higher warp factor at the helm of his own version of the USS Enterprise. Suddenly, we were off, and it was an unforgettable flight.

Rossini, too, had a few surprises up his sleeve. Who thought he could write such a magnificent fugue as in the final movement, with a cascade of “Amen”s tumbling from the awakened Philadelphia Symphonic Choir under the direction of Joe Miller? Who indeed thought it was possible that Death would have his comeuppance on that dreary winter day?

Linda Holt is the author of The Black Spaniard (2016) and Invictus (May 2019) and writes for the Broad Street Review.