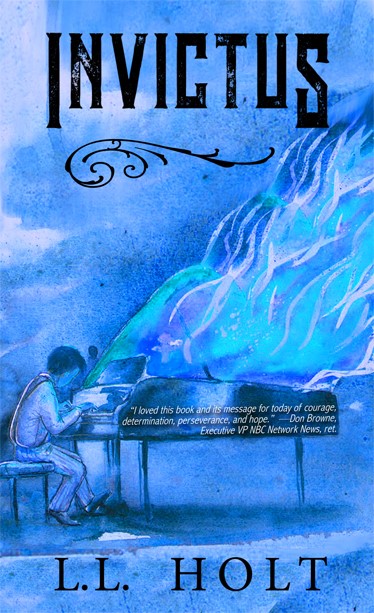 How a young musician overcame prejudice
to become an international sensation

The year was 1770, the place was Bonn, Germany. His drunken father took one look at the baby with the dark complexion and lost his temper. His mother insisted the child was his. This was the beginning of a childhood filled with anxiety, prejudice, and uncertainty for young Luis. We know him as Beethoven.

Was Beethoven black? Probably not, in terms of DNA. But there is little doubt that the child who grew up under the thumb of a domineering, alcoholic father did not look like other members of his family, or even his community. We may never know why. Descriptions of him by neighbors and friends often begin, “He was black,” meaning darker than others, and therefore subject to discrimination in the German north.

Invictus, a new novel by L.L. Holt published by Harvard Square Editions, takes Beethoven’s otherness as a point of departure as it explores the child’s journey from birth to a series of setbacks in his 16th year. But the obstacles and catastrophes that the resilient child navigates are not the final word: we know how this story will end.
Invictus is woven through with several other themes rooted in the revolutionary age in which the boy lived.

This was an age in which European scientists were exploring the notion of race and reason. While young Beethoven (known as “Luis” in this story) was growing up, a scientific experiment was taking place in Kassel, less than 200 miles away, in which Africans were kept without their permission and subjected to tests. Most eventually died in the cold northern climate.[i] Yet, at the same time, there were other scientists who asserted that race as we think of it did not exist, and that truly, as Beethoven was to declare through Schiller’s Ode to Joy late in his life, “all men are brothers.”

Another theme is the rise and fall of the Illuminati, which originated in Germany and spread north. Beethoven’s childhood teacher, Christian Neefe (NAY fuh), was the head of the local Illuminati chapter, soon to be outlawed, with death a penalty for membership. Many believe the great composer was a Mason and Illuminati member, a position this book upholds and explores in scenes filled with intrigue and adventure.

Luis falls in love, gains a champion, and is sent to Vienna to expand his gifts in this fictionalized view of his early life seldom previously explored, but must return to parochial Bonn when his mother, the only person who truly loved him, is on the brink of death. She dies, his sister dies, his father sinks further into alcoholism. Yet, something stirs within his heart. And from the other side of history, we know his dreams have not been in vain.

Invictus can be ordered online at amazon.com , bn.com , and other booksellers, as well as in bookstores. L.L. Holt is also author of another novel about Beethoven, The Black Spaniard, and is available for interviews and social media conversations.

Harvard Square Editions to release "Invictus" by L.L. Holt in May 2019

Invictus by L.L. Holt will be released May 2019, it has been announced by Harvard Square Editions. Review copies are being sent out in January 2019. This novel follows the stormy childhood of a dark-skinned boy growing up in a dysfunctional white German household in the late 1700s. The child has many adventures, escapes the horror of domestic violence, and learns to overcome discrimination and intolerance through his music.

At the end, it looks like the odds against him have won. But we know differently: his name is Beethoven. (Book cover art by J. Caleb Clark, copyright protected) 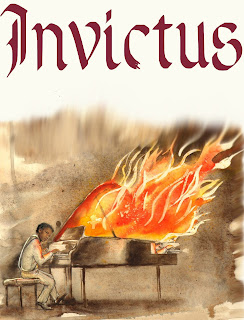 Final proofing of galleys for "Invictus," novel about a child's indomitable spirit

Final proofing of the galleys to Invictus, a novel about a dark-skinned child's struggles against discrimination, bullying, and domestic violence in late 18th century Germany, is taking place during June 2018.

The novel will be published by Harvard Square Editions during the 2018-19 publishing cycle, and already has received praise by individuals in the academic and music communities.

Here is an excerpt.  In this scene, the child, Luis, meets his great teacher, Neefe, for the first time. After years of having musical training forced upon him, often accompanied by beatings, the boy has a different kind of experience in store:

Reflections of a Western Daoist

Although much of my writing in recent years has been about music, for many years I also have written about Daoism, Chinese thought as it has taken hold in the West, Yoga philosophy, and comparative spirituality.

The following essay appeared in a 2006 issue of The Empty Vessel, a journal on Daoist thought and aesthetics founded by Western Daoist, Solala Towler. In this essay, I describe my own Daoist journey, a path which blends seamlessly with Yoga and the Christian religion in which I grew up. I am currently co-editor and chapter contributor of a book on Daoism and science which is scheduled for publication by Nova Science Press in May 2019.

http://www.religiousscholar.com/reflections-of-a-western-taois/
Posted by Linda Holt (L.L.Holt) at 4:09 PM No comments:

(This review appeared in the Broad Street Review on June 4, 2018. To see all my reviews, go to www.broadstreetreview.com and search <Linda Holt>)

I was not prepared for Studio Dan’s Inventive Mothers: A Tribute to Frank Zappa (June 2 and 3, 2018). Staged in a dark corner of the Kimmel Center’s basement, the show, part of the Philadelphia International Festival of the Arts, promised a walk down memory lane honoring that bad boy of the 1970s, Frank Zappa. ​

Imagine my astonishment when from a low, Wagnerian grumble, the ensemble of 13 youngish musicians from Vienna, Austria, not only recapped some of the West's greatest sounds from the last century but pioneered a new music binding jazz, rock, classical, improv, and pop.

It was original music-making fused with influences from Karlheinz Stockhausen, Ellington, John Adams, and Jimi Hendrix, interpreted by Dan Riegler’s ingenious arrangements of Zappa melodies, and several startling works by Studio Dan members. Commentators have lamented the uneasy couplings of these disparate influences, and suddenly here it is: the future of music, in the basement of a traditional concert hall.

Getting in the groove

Riegler assembled, coached, supported, and inspired a screamingly talented ensemble of musicians. The 14-member group, all virtuoso soloists, formed in Vienna 13 years ago. Together they reclaim the cheek and wit, of Zappa’s catalog, and some damn good tunes.

But Studio Dan (a pun on the title of Zappa’s album, Studio Tan) is also much more. The musicians have an infectious energy. Once they connected and got into the groove, there was no stopping them.

In defiance of expectations, Riegler presented the image of a classical conductor: self-assured, in a conservative grey suit, carefully following the scores on his music stand. Given the program’s rhythmic excitement, he had a few cool moves that wouldn’t be seen upstairs when the symphony’s in town.

Yet, many times in each selection, he stood back and let these sublimely talented artists display the full range of their improvisational and technical skills. Each musician was given at least one solo opportunity, with several duets and other groupings.

While all were remarkable, special note must be made of the duet featuring percussionists Hubert Bründlmayer (drums) and Raphael Meinhart (everything else), creating dust devils of sound. The decibel level and small venue, filled with a spellbound audience of mostly 50-somethings, intensified a delightful display of passion and virtuosity.

I was tremendously impressed by Clemens Salesny on sax and clarinets, but especially in his fluid, soulful bass-clarinet solos. And all was not blistering volume and speed: My eyes misted over as Michael Tiefenbacher (piano) and Bernd Satzinger (double bass) improvised a tender jazz duet.

Shining in the string section were Sophia Goidinger-Koch, violin; Magdalena Zenz, viola, memorable in a duet with soprano sax; and Maiken Beer, cello.

Unfortunately, the program did not name the selections, although Riegler identified each work in his friendly chatter between numbers. Some selections included or alluded to Zappa tunes, such as “Take Your Clothes Off When You Dance,” "Be-Bop Tango,” “Let’s Make the Water Turn Black,” “G-Spot Tornado” (distinguished by its musical logic and crazed, manic drive), and “The Eric Dolphy Memorial Barbeque,” which got a roar from fans when announced. The program closed with the ever-popular “Peaches en Regalia.”

Riegler composed the opening salvo, while bassoonist Christof Dienz composed two interludes of striking originality and lyricism. One of Dienz’s pieces contained a mesmerizing effect demonstrating just how in control these musicians are. It included single staccato chords with unusually long rests between them, articulated by five or six instruments on different parts of the stage, a daunting challenge.

“Improvised Concerto for Bicycle, Prerecorded Tape and Instrumental Ensemble” (1963), offered a tribute to Zappa’s debut on the Steve Allen Show. This included sounds from a bicycle’s spinning wheels and pedals, tapping on the downtube, scraping the whirling spokes with a stick, all while a taped voice droned “Mary had a little lamb.” The piece was worth a few minutes but was not as engaging as the rest of the program, so full of wit, ferocity, and splendor.

My only other criticism was the lack of a playlist. The one-page sheet about Studio Dan, distributed at the beginning of the concert, contained a long quote by Zappa, ending with the words, “Music is THE BEST.”

This is clearly the collective opinion of Studio Dan, and we are the happy beneficiaries of their philosophy.
Posted by Linda Holt (L.L.Holt) at 7:28 AM No comments: