This review appeared in the Broad Street Review the week of March 11, 2018: http://bit.ly/2p0Rfcd

Here’s one way to describe Michel van der Aa's Violin Concerto, which received its North American premiere March 8 through 10, 2018: utterly captivating. Violinist Janine Jansen joined Yannick Nézet-Séguin and the Philadelphia Orchestra in a performance of a thought-provoking work that’s breathtaking in scope and enjoyable on every level.

In many ways, the work has a familiar, almost conventional charm. Its 25 minutes are evenly divided among three movements, which follow the fast-slow-fast pattern with which concertgoers are familiar. It is written in standard notation, with a bit of key signature (3/4) right at the beginning, but soon veers off, as though the notes become birds and fly off the page, taking us into a journey of unexpected delights.

In the first few bars, the solo violin languidly climbs from a low whisper to a stratospheric suggestion of yearning, then, joined by the orchestra, spins a fascinating sound saga. The piece contains a full workout for the orchestra, including a trio in the first movement with Jansen, concertmaster David Kim, and principal cellist Priscilla Lee.

One of the concerto’s most fascinating elements is the way the enlarged percussion section is spread across Verizon Hall’s stage. In one sense, the percussion players coddled the strings and brass in a protective shell. But were they also looming behind the orchestra, ready to snap, like a Venus flytrap? That level of nurture and menace was retained throughout.

Just hearing the bass drum thundering from stage left was a memorable experience. And what a variety of percussion instruments, more like the contents of my garage than a concert stage: egg shaker, sandpaper and wooden surface, washboard, whip, and the enticing “sizzle cymbal.”

The percussive section plays such a pivotal role in this concerto, clicking and clacking like R2D2. It’s almost as though there are two orchestras, sometimes at play, other times at war, the clarion tone of Jansen’s Stradivarius stitching them together with impeccable grace.

Jansen is a wizard in her own right, expressing a deeply felt response to this music: sometimes lyrical, but more often agitated and determined. Her technical mastery was unfailingly evident and, if this concerto traced a kind of battle among sometimes friendly but often confrontational forces, she emerged the clear winner.

Nézet-Séguin was more reserved than usual, focused entirely on the complicated task of both leading and working in sync with the soloist, for whom this concerto was written (van der Aa has said that he composed the work with Jansen, rather than any particular instrument, in mind). Jansen and Nézet-Séguin were a perfect balance of partners, a yin-yang symmetry bringing out the textures, tensions, and drive of a work that promises to become a permanent part of the concert repertoire.

The second part of the program brought an entirely different tone. Since the Stokowski years, the orchestra has been associated with Rachmaninoff’s Symphony No. 2. It’s the epitome of the Romantic symphony, even if it premiered in 1908, the dawn of the modern era.

If Nézet-Séguin was reserved in the van der Aa, he held nothing back in the Rachmaninoff, performing a graceful conductor’s ballet on the podium like a taiji master. A good thing, too, because he led the players through a thoroughly satisfying rendition of this familiar masterpiece.

For my taste, this rendition was a little too assertive (my idea of Rachmaninoff is compatible with sinking into piles of down comforters with a plate of cream-filled chocolates), but great music is amenable to many interpretations. Nézet-Séguin pulled out the stops, with gushing melodies and spirited bursts of determination. This is a classic reading which brings out the strength and global vision of its composer, ending with a shout of exultation and artistic triumph.

The concert started with remarks by the conductor, noting that the performance was being recorded by Deutsche Grammophon. With a smile, he very diplomatically requested that members of the audience take extra care in the cultivation of silence during the performance. Unfortunately, that seems to be Philadelphian for “cough more often and louder than usual"!

If you missed the concert and were not able to attend a performance at Carnegie Hall on March 13, you may search for van der Aa’s work on YouTube. The Philadelphia concert was held in Verizon Hall. 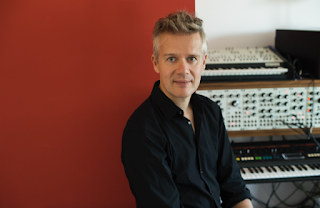