The pianist sat worried at the keys.

It was that moment when the sun emerges from the night.

Or was it dusk, and had the sun just set?

Whatever time it was, whatever day,

The man, not a religious sort,

I have no songs to give. Lord, say

The word, unloose what’s pent up in my heart.

I’ll change my ways, live only for my art.

“How I regret my misspent days.

Let my soul sing again, and You

Alone will be the object of my endless praise.”

Prayers from these swaggering self-centered fools,

And so He stopped the sun’s descent (or rise)

And brushed His hand across the pianist’s eyes.

It was a spell,

And so it fell upon the sad man’s soul.

Near blinded by the Light

That sat beside him on the quilted bench,

He blinked, too stunned to gasp.

Every finger in his fists unclenched, unclasped.

The pianist saw no form or face,

But heard resounding in his bones

“Be silent. Listen carefully to what I say.

I have a deal to make with you today.”

Who would have thought that prayers

So easy and immediately could yield

“And not make fun of nuns and rosaries.”

“What is this deal?” the musician asked,

“Will I compose again? Will thousands thrill

To bagatelles and variations without end,

To fugues, and trills, and lilting rounds, and

Choruses and songs? Will my creative power,

“You shall, it will,” the Master said,

So light and free. All I will restore to you

And more, if you make one small sacrifice

“I’ll give you all the music that Heaven can embrace.

I’ll yield the murmurs of My Heart,

The swirling stars in space.

The wing beat of a hummingbird

The crimson of the dawn, the lion’s roar,

I’ll fill your soul with sound that never has been heard before.”

The young man was transfigured,

He almost would have glowed,

Except the thought of one small thing,

“That all sounds quite enticing,” he said

With some control. “But I can’t help feeling

The price will weigh too heavy on my soul.”

But your hearing take instead.”

“My hearing!” The pianist was silent. Then, bending from the waist,

He fell upon the keyboard. The keys crashed in their place.

A terrible discord filled the room. The sun’s reflection on the floor,

Quivered, then was no more.

“It is the law of Nature I created,” the Mighty One whispered in his ear.

“For any force of Nature, an opposite reaction must appear.

“Humanity, potentially my greatest feat, hungers for art to lift them from defeat.

There is no other mortal, save yourself, who can deliver them from grinding strife.”

“But how could I endure, not hearing my own work?

This is my life!”

“You will see it in the faces of those who do

And in their lives, transformed, because of you.

You will see it in the changes you have rent:

The musician sat up straight, then looked away.

He could not tell if it were night or day.

But as time passed, the strain

Of sorrow on his face did not stay long.

“I never could resist a song,” he said at last,

with a hint of a wink, looking back at the Light

which already had begun to shrink.

“You’ll never know unless you take my dare.”

The Wise One paused.

“I know the pain of sacrifice. But never mind.

You’ll be glad when it is over,

but it still hurts at the time.”

And so the Light receded, and the day began.

(You see, it was a rising sun, as Franklin knew.)

At the keyboard, fresh improvisations flew

From the fingers of the sad young man. Unfurled,

They rose into the air

And through the window's light,

In the direction of the sun

And the shepherd's silent pipe. 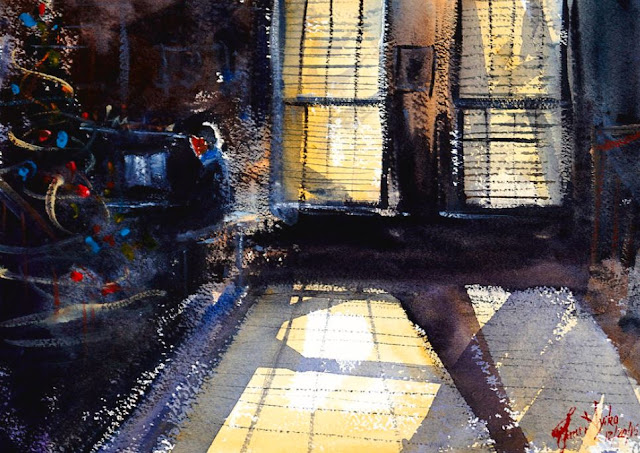